Why I cannot publish Nightingale

On Saturday morning,  received a notice that Riptide Publishing would file legal action against me if I do go ahead with the publication of Nightingale.

Legally, that's their right - they still hold the contract to the book. A contract that contains no clause that forces them to publish the book at all. (The rights don't reverse upon "failure to publish", in other words, if Riptide decides to not publish the book, there's basically nothing I can do.)

Now, the self-publishing of Nightingale wasn't a surprise to Riptide. I informed Riptide of my schedule, even who's doing the proofing, and that everything was above board can be seen in the fact that they gave me the un-watermarked cover image. (For which I was supposed to pay out of my royalties.)

The background to this is that I've wanted to leave the "partnership" for more than a year (for many, many reasons, but the most important is that I want to focus on coaching and I see a conflict of interest between the function of publishing and coaching/advising authors), and another is that I prefer to consider writing a hobby, a minor part of my life - it allows me to write whatever I want, publish it whenever I want, and only do as much "marketing" as I feel comfortable with. And, of course, hire editors I trust and know. Basically move away from wanting to earn money back to being an amateur who writes what he damn well pleases and published under those same terms.

Now, Riptide has sent me an agreement to leave the "partnership" that was so incredibly lopsided (all advantages go to Riptide, none to me that I'm not legally entitled to anyway) that I find it impossible to sign.

And to put on the thumbscrews - which is what it feels like - Riptide is holding my book "Nightingale" hostage - which it has no interest in publishing, didn't edit****, didn't line-edit, didn't proof, and even the cover is 90% based on a draft a friend made for me.

Riptide of course knows that this is my best novel ever, and what the book means to me. It's basically the perfect stick to beat me with.

So, with a heavy heart and tears in my eyes, I have to tell you that Nightingale will not be published. Legally, Riptide owns the book, and according to the contract, they don't even have to publish it. The contract I signed - thinking I was "among friends" - contains no "failure to publish" clause.

At this point, I don't know what will become of the novel.

The only thing I know is that I consider starting, funding, working for and supporting Riptide one of the three biggest mistakes of my life.

Riptide is no longer a work of mine - I distance myself from it as far as I possibly can, and by the grace of the gods I will be allowed eventually to leave the "partnership" without losing control of all my work.

I consider it ironic that a book that's all about freedom and artistic self-respect ends up the hostage of this ... "entity".

As far as I'm concerned, I'm too dazed and hurt and in pain to even think whether I want to write at all. After this blow, I'm half a step away from quitting entirely - I can't even think of writing at the moment, or the future. I'm heart-broken, humiliated and upset.

**** I paid the developmental editor (whom I hired personally because I always planned to self-publish the book) and Riptide so far has paid half of that fee. But Riptide was not involved in the edits or the final shape of it - it didn't change a comma. What Riptide did contribute is a damn fine blurb, and an editing letter upon acceptance that I ignored.

Why Nightingale is not a romance

I'm not one for false advertising - so just a few words about Nightingale and where it fits on the bookshelf.

And that's fine, because I have written "M/M Romance" and will very likely write some more of that - in fact, there's a co-written book that's most definitely a historical m/m romance (though heavy on the history) in the wings.

However, Nightingale is not an M/M Romance. It's a gay historical. It's actually interested in the history of a gay person - one who's problematic and makes mistakes, and is conflicted and very much like a real person, not a "romance lead". I'm a lot more interested to explore the history than the romance. let alone "Romance" as defined by reader expectations. (Reader expectations are all well and good - I'm writing this whole entry to manage expectations - I WANT people to find the books they want to find and save their money for those.)

And yet, of course, there's a love story, because my gay character falls in love with a guy and interacts in the very queer entertainment scene of Paris in the 1940s. On a certain level, it's enemies-to-lovers, but it's a "new" take on the theme - I'm a lot more interested in mutual perception and pre-conceptions and prejudice than people holding knives to each others' throats (though that can be fun).

Many people will find Nightingale romantic. That's awesome. I think it's one of the most romantic stories I've ever written. Apart from Return on Investment, it's most definitely the most personal, most "me" story. Somewhere in those pages, you'll find me - this is me unmasked. The book has terrified me for four years because it's just so damn personal, and THAT part has nothing to do with Nazis and Paris.

Mostly, along with Return on Investment, it's a sign post of where my writing is taking me, now that I've largely overcome the fear of following the crazy stuff. The next one along that path will be my book set in 1820 that I'm currently researching.

Nightingale is not a romance, but it's a love story. I'd call it a historical novel first that happens to have a gay protagonist. It's the best thing I've ever done. No competition.

By the grace of Apollo and the Muses, I hope to write several more of these, if I can find the courage.

Eventually, I will write classical "Romance" again, because those are fun. For the moment, my solo work is going down a very different path. But if you liked Return on Investment, Nightingale might be for you, too. For me, it's another very big step forward, and I'm excited about where it's taking me.
Posted by Aleksandr Voinov at 22:48 3 comments:

Meanwhile, Gold Digger is in audio. :)

Even if you were only luke-warm about the e-book (and gods know it has a few issues), Alexander Masters has done a tremendous job with the characters and acting. I can honestly say I prefer the audio version to the text version by a solid mile. 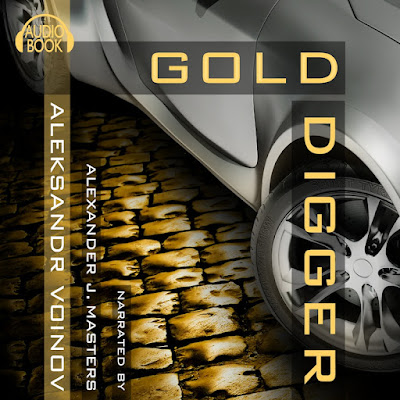 It's available on Audible, Amazon, and iTunes.
Posted by Aleksandr Voinov at 21:22 No comments:

I've taken a four-day weekend off work to accomplish a few things. Number one is my taxes (urgh), but number two is the copy-edits/proofing of Nightingale - so we're on track to release Nightingale on or before 28 October.

The biggest things that remain are: the cover, the print layout, and deciding on two sentences where I'm just not sure yet.

Considering how very little time I have for admin and book-keeping and all that, it looks like my next books will at first be Amazon exclusive ebooks, then, once I have a free moment, I'll create the print versions on CreateSpace (this means I need to learn how to do a proper book layout - all stuff that takes time and focus, which are two of my rarest resources right now).

One reason for all that is I'm just really freaking busy and what little time I have I want to focus on writing and creating new projects. The other reason is I'm curious about Amazon's various marketing tools and the ability to run promotions. And I like print. Print is awesome for conventions and giveaways.

I'm planning to get an audiobook, German and Italian translations done too, but the timing of those depend on the book's sales. Ideally, the English version pays for the other versions - which is a bit of stretch goal, I admit. It would mean I'd need to sell 2,250 copies, which is not impossible but is actually far more than my solo books have ever sold. And more than 2,500-2,600 if I was also planning to recover my expenses for editing etc. We'll see how that works out, in the end.

While I'm employed under the current conditions, the best I can do is to try and keep writing modest amounts and just put stuff on the market and let the books take care of themselves. If the hobby feeds itself, that's awesome. But to make this work at all, I really need to focus on the two basic things - writing, and publishing. Things will be different when I work fewer hours, but that won't happen for several years.


Posted by Aleksandr Voinov at 10:49 No comments: