Lori and I have come up with a fun game to give away some books. You get to name Rolex. Pop over to her blog here and have fun playing.
Posted by Aleksandr Voinov at 11:15 No comments:

Last weekend, I've had my first massage lessons, and I love giving massages. I over-worked a few muscles in my forearms, but a couple days later, I was pretty much back to normal, so all's good. I now have to get 80 hrs of practice, several case studies and homework, and I'll be ready for my exam in late September. Then a month off and I'll start the sports massage course at the same place.

LA Witt is currently at my house and we're both so slammed with deadlines that we're right now working on our solo books rather than continue on the next book in her Wilde's series (basically a follow-up of No Distance Left To Run); I'm currently battling through Suckerpunch and have reached the "boring piece of shit" stage, but I think part of my problem with the book is that it's currently single-POV and might need a double POV (both Nathaniel and Brooklyn). Which means retro-fitting everything I've done so far, which is a bloody pain in the neck.

Normally, it's the other way around - I tend to eliminate additional POVs and stick to one. For example, I went 25k in Scorpion with a double-POV, alternating between Steel and Kendras before I realised Steel is just not that interesting. I frankly think it increases tension and stakes if I stick to one POV - and it's more difficult to tell a whole story that way even though the POV character is biased or might not "get" what's going on, while the reader should. I do think I'm best when I go deep into a single character and limit his ability to get the whole picture. Of course, he should be smart and perceptive--I've yet to write a really dumb/unperceptive character. Some of my favourite books are single-POV: all of Scorpion, Skybound, If It Drives, and Capture & Surrender, and of course Hostile Ground, which is currently tearing up the Amazon charts. (Thanks, guys!)

I've now been "freelance" for five months, and my stress levels are way down. I could be more productive, but overall, I think I'm in a pretty good headspace now. The massage course definitely helps with that--learning new interesting skills you can actually use really helps with the sense of being stuck in place. The big thing now is the UK Meet, and after that, I'll focus on finishing up some books and becoming a damn good masseur.

To that end, my partner sponsored a nice massage table which I have to assemble and then I'll unleash what I know about back massage. That's the issue with learning it a certain way--you do need the right tools to not ruin your back and assorted joints. But it's fun, and I have lots of volunteers to get my 80hrs of practice.

Life's good.
Posted by Aleksandr Voinov at 20:30 No comments:

I'm tempted to just put this up here without comment, mostly because so many things still need doing - the final editing, proofing, layout, file conversion and uploading. But generally, once I see the cover, a book is starting to feel "real" for me.

Garrett Leigh was the cover artist on this one, and the brief was basically me flailing about trying to cram in a little bit of understated sexiness (very understated), and show it's really about character growth, and, oh, it's a financial thriller, too. (Covers should always at least hint at what the genre is, I'm led to believe.) Garrett came up with this version pretty much right away, and all the work was focused on fine-tuning strap-lines and what words should look how and go where. From the very first draft, I couldn't imagine Martin (my main character) looking any other way. What do you guys think? 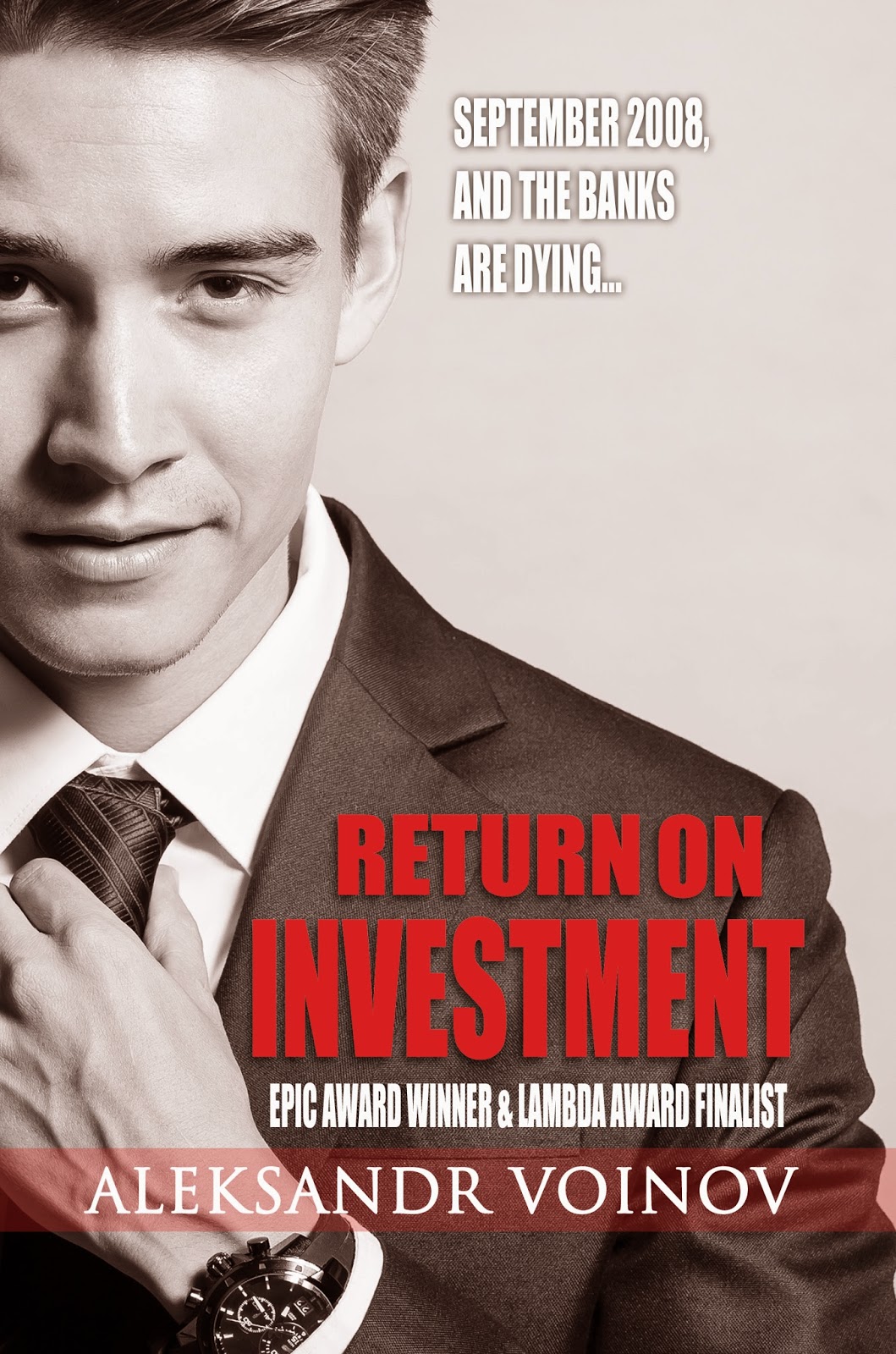 Posted by Aleksandr Voinov at 14:40 4 comments: 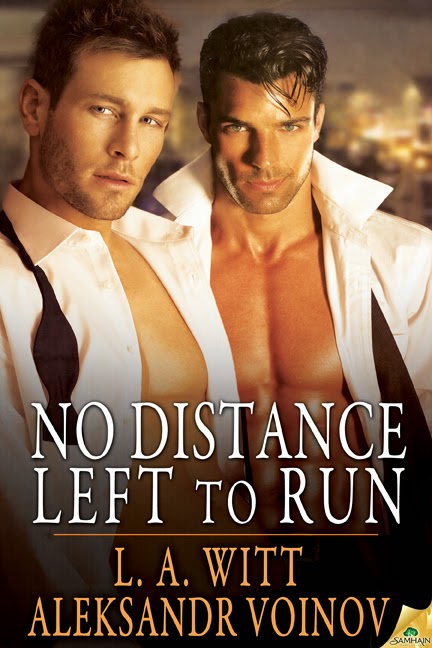 Buy it at Samhain.
Posted by Aleksandr Voinov at 22:25 No comments:

I'm looking forward to starting my massage training in two weeks. I'll be able to give basic massages from September (which is the date of my first exam), and I've had a chat with my local hairdresser who thinks setting myself up as a masseur locally is a great idea, so that's my plan of action.

After being out of an office for four months now, I can't imagine going back, to be honest. I don't wanna. (I might still return to my previous line of work if I get an amazing offer that helps me pay off the mortgage in a few years, but it would have to be an amazing offer - and none of those seem to be happening on the market. People are hiring journalists with my specialisation, but not editors, and no job offer could be amazing enough to return to journalism.) So I have to make a business plan for the massage part of my portfolio to generate a supplementary income. In August or so, I'll be starting to look at local therapy rooms to hire on a day-to-day basis, or maybe join forces with other health-and-wellness people.

The behemoth novel (code name: ROI), which I spent two weeks editing hard, was turned down because it's not romantic enough and essentially I'm not willing to turn it into a typical romance to increase expected sales numbers. It's a sound business decision. No hard feelings, though it came as a surprise and puts me into an awkward position where I have to fend for myself. You only notice how much work the team does when that support is no longer there.

I was considering sending ROI to agents and mainstream publishers, but I have to admit that I'm quite demanding in terms of what I want from a publisher, and impatient. I no longer have the stomach to wait months for an agent to get back to me, and then months and months for the publisher to get back, and then two to three more years until somebody can fit me into their catalogue. Also, it's a genre-buster. It's far too gay and explicit for the mainstream financial thriller crowd, it's too much a financial thriller for the coming-of-age crowd, and not nearly romantic enough for the romance crowd, and it's far too business-y for the erotica crowd. Hey, even I don't know how to market it or who could possibly be interested in reading this. This makes it very unsuited for all m/m publishers I know, and I have no real contacts to traditional LGBTQ presses (who will then have to work out how to sell this genre-cluster to anybody, really).

So, after careful consideration, I'm going to self-publish ROI in June or July via Amazon, likely Amazon exclusive (this keeps my book-keeping to a minimum and my royalties to a maximum). What I now need to sort out is editing, proofing, layout and cover and how to do all this. There's also tax documents to fill out. Essentially, I'm throwing this book at the mercy of you, my readers, making it the best I can on my very limited budget, and hope somebody loves it. Letting it die is no alternative, and I trust that any book finds the readers it's meant for, eventually. I'm hoping I'll have all the ducks in a row for a release in June/July.

I've also done some financial modelling, and done a cashflow analysis, and it's pretty clear I need to eventually go back to a second job in some capacity. I've deleted a long whiny post about why that's the case with proof and numbers, but it comes down to either writing books that sell significant amounts or writing the books that keep me up at night, and those aren't the same.

I've also done some soul-searching (I found one, I'm happy to report), and I remain unsuited to writing the type of books that sells vast amounts of copies. In marketing terms, I'm a solid midlist performer with an enthusiastic but small readerbase. I'm the type of author publishers won't lose money on, but they won't make them rich or hit bestseller lists. I do win some awards every now and then, but I'm also too proud to take money from my partner to "fund my dream". It's a life lesson from my mother who ended destitute and broken when she had to rely on a husband who was a functional sociopath and dropped her when she got ill.

I write the books I must, and that's the price for it. Not that I'd be any good writing any other type of book. The luxury of writing what I want means I need to find a way to pay my remaining bills with a second job (ideally massage, though we'll see how that goes). I'm hardly the first author who faces that decision, so no need for anybody to cry a river, least of all myself.

Generally, I don't expect this situation to get any better. I've had a look at my spreadsheet and I'm clearly drifting away from writing romance. Just this morning, I realised I have a series of at least four novels that won't have any romance in them. For me, that's 12 months of work. There's no way I can afford to write them if I want to live off writing.

But I'll still write them, sales be damned.
Posted by Aleksandr Voinov at 17:30 37 comments: