Circa halfway on Risk Return

So the new year has started very nicely for me - this is yet another year where I start with a big spreadsheet to track my wordcount and even bigger plans, but so far, the tracking (and wording) is going well. I only skipped three days so far in terms of writing, and two of those were devoted to editing Broken Blades. Other than that, I've been racking up wordcounts from anywhere between 125 and 1,800 per day.

And just like any slow, painstaking work, constant effort is beginning to pay off. This is a book that is built around just two ideas - not plotted, so it's growing organically. With that kind of book, I tend to roughly at 1/3 understand what the story is about, and roughly at that point I know what needs to happen and also in what order.

My self-imposed deadline of 3 February might be a bit too tight, but I would expect to wrap it not much after that date. Publication I think in March - I do have a cover but I'm saving that for a "reveal". It's very good. :)

So, no pressure. It's mostly that I want to write what else I have to say about the characters, and how their relationship develops. Much of what reverberates through this book is stuff that happened 10 years before Return on Investment - Martin is picking up the pieces and begins to understand what events, factors and people have shaped Francis.

After that, I kind of see a spin-off happening with a minor character I haven't actually met on the page yet, but he's pretty cool in my head, and there's an Easter egg in Risk Return that points towards Unhinge the Universe.

The true miracle is that the characters are still so "fresh" that I can summon them up even after so many years - Return on Investment is a really old book and I've lost touch with much more recent works.

And there's a fun question from the comments a few days back - specifically if I was going to write more books in the sci-fi universe of Incursion and Dark Edge of Honor (yes, they relate to each other).

FUNNY YOU SHOULD ASK.

The answer is - absolutely. There will be a sequel to Incursion where the Glyrinny meet the Doctrine.

Let's put it this way - both parties really could have imagined a better, happier way to spend their time. I've wanted to let those two clash for a long time.

Timing-wise - I don't really like setting deadlines several projects ahead, but I'd *like* to work on that towards the middle/end of the year.

2016 looks like a year so far where I wrap up my past and move into the future - so all the prequels and sequels and projects I've had in mind for so many years will get wrapped up when I relaunch the books that return from my ex-publisher - and I'm going to write completely new books with completely new characters too, just to keep the balance and because they've been pestering me.

Posted by Aleksandr Voinov at 18:16 No comments:

They only had one night together—a stolen interlude at the 1936 Olympics. After Mark Driscoll challenged Armin Truchsess von Kardenberg to a good-natured fencing match, there was no resisting each other. Though from different worlds—an Iowa farm boy and a German aristocrat—they were immediately drawn together, and it was an encounter neither has ever forgotten.

Now it’s 1944, and a plane crash in hostile territory throws them back together, but on opposite sides of a seemingly endless war. Facing each other as opponents is one thing. As enemies, another thing entirely. And to make matters worse, Mark is a POW, held in a cold, remote castle in Germany… in a camp run by Armin.

They aren’t the young athletes they were back then. The war has taken wives, limbs, friends, leaving both men gray beyond their years, shell-shocked, and battered. The connection they had back then is still alive and well, though, and from the moment Mark arrives, they’re fencing again—advancing, retreating, testing defenses.

Have they been given a second chance? Or have time and a brutal war broken both men beyond repair? 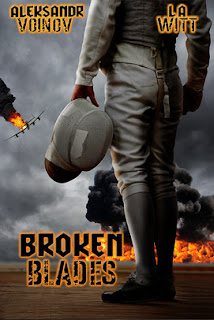 Posted by Aleksandr Voinov at 15:03 4 comments: