If you guys are anything like me, I get confused when I'm interested in a new author and they've got more than, say, one book out. Where to start?

Well, I have nearly 30 current releases going, and I get some very confused readers who "have heard of me" or "are interested", but have no clue where to start. So I thought about that problem and while all the information is out there - blurbs and excerpts - it's never really in one place. And to access it, people have to be online to access publisher websites or Amazon/B&N or whatever place they go to for that information.

So I decided to make it easy and create the kind of little helper I wanted to see myself. And it was a few days' of work, so originally it was supposed to be a birthday present from me to you, but there's no way I'm waiting until 4th May to present this beauty. 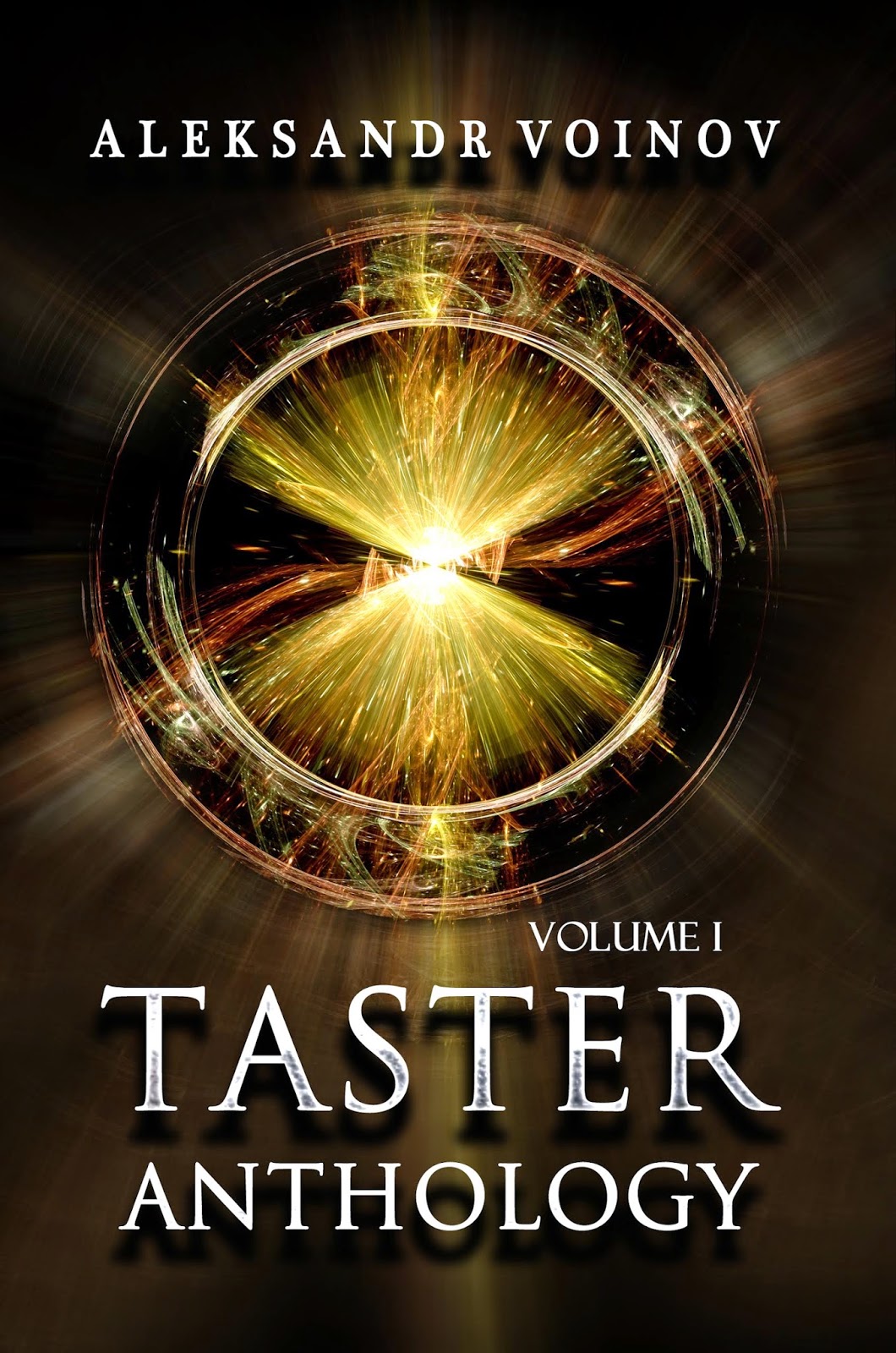 Taster Volume I combines all my currently available releases with excerpts (always from the beginning, and usual several chapters) and blurbs. But what's even better, I've added some author commentary for each work to make it interesting even for people who've already read the books, and a chronological list of releases. This anthology is up to date - from Deliverance to No Place That Far, so roughly end-2009 to beginning of 2015.

You can get a PDF version, an epub and a mobi on my website here. I've done the conversions myself, so it won't be quite professional grade, but they seemed clean enough for me.

All in all, it's nearly 170,000 words or almost 500 pages. And needless to say, feel free to share the file with your friends, too. I hope you'll find it useful and entertaining.
Posted by Aleksandr Voinov at 17:40 No comments:

I've been extremely fortunate again - yesterday, I received an offer from the investment bank I was interviewing with and I've taken it quite happily and proudly. It took three rounds of interviews to get there - this was literally the most attractive job I've come across in four years (and four years ago, I landed my favourite job in my whole career), and I clicked with the culture and people working there.

I've recently done quite a bit of work around my "values" (the stuff that's driving us), and found a company that aligns with those. I like efficient, focused places - in fact, I need those to do my best. Very few companies are focused like investment banks. I'm also quite interested in the capital markets - business, the flow of money, company research, stocks, the big economic picture - and it'll be good to go back to all that.

And some of that research has made it into books - both Gold Digger and Return on Investment were cut from the real-life financial shenanigans going on.

I've already received some worried messages about what that'll mean for my writing. At the moment, it's hard to say. I was productive in that other investment bank (writing in the ebbs of the workflow), but it seems this place is too efficient for that - the workload seems to be significantly larger, and I'll have more responsibility actually managing projects.

The hours are VERY early (I'm a night owl, so I'll need to re-train my brain and try to get sleep when the opportunity arises), but they aren't outrageously long. So there will be time to write.

So, for the moment at least, I'll consider writing strictly a hobby. No deadlines, no "I should do this", no expected minimum income, no production plan. I've considered taking a year out and focus entirely on other stuff (like a martial art, or switching to a different medium like sculpting or painting) to refresh the Muse. I might still do that.

I want to finish Suckerpunch and Dark Heart because I promised those and people are waiting. Mostly, though, I want to finish my WWII cycle - essentially more books in the vein of the Bird Book. The nice thing is that the bank job means I can afford to write books like that. It'll be a huge relief to not have to plan my release schedule or genres according to what sells and might allow me to pay the mortgage. It also means if a book needs a year or two, I have that time while I'm employed.

Basically, I can now afford to not care if anything sells. I'll just put them out there and write the next one. If they make money, great, if not, at least I wrote them and hopefully evolved as a writer.

Those books will still likely have a love element, but I don't feel I'm a writer who delivers the typical (lucrative) romance plot very well, so I'll stop trying. If it happens, great, but I won't focus on Romance by any means. I'll focus instead on stuff I'm good at and to create more balance in my life, which has been out of whack - working too hard and too much and being totally focussed on just one thing will do that.

I want to learn new things, maybe write some non-fiction, write the books that keep me up at night and not the books I *should* be writing or the books that "sell". More historicals, fantasy, sci-fi, maybe horror. I might even write "straight" books under a different name, just to see if my skills are still sharp and because I have a Templar bunny that wants out.

I'll be attending the European conferences in Bristol and Munich, but I don't foresee travelling much beyond that for writing-related things - I have limited holidays and it would be nice to spend some of that time with my very patient partner.

So, it's a major shift, really. It's not a retirement - obviously not - but while I can afford to do so, I'll write the weird and wonderful books I've pushed aside for too long, at a speed that suits them and me. I've had a good run so far, but it's time to switch direction and focus on other things. I want to grow as a writer and person - and leaving the little comfortable corner I've made for myself will achieve that.

For me, that's the way forward and I've shied away from that for too long - I like my comfort zones, too. But I'm sure I can trust the Muse and there will be wonderful books in the future - whatever their genre.
Posted by Aleksandr Voinov at 14:24 11 comments:

As of yesterday, I'm a certified NLP Coach/NLP Practitioner - about the result of three hard weeks of preparation and a very hands-on in-person course and test that completed yesterday. Met amazing, inspiring, wonderful people on the course, did a lot of work on myself and others. It was quite the experience.

At present, I'm still working out where I'm going to taking all those therapy skills I've been acquiring over the last few years, but it's calling to me and I'm starting to see glimpses of what I'm starting to call "my system". In the end, I'll be making my own, all based on NLP and various meridian techniques as well as hypnosis. Mostly, I think all the questions I still have will resolve themselves as I get to the NLP Master Practitioner/NLP Master Coach level. I'm also looking at going for the Trainer/Master Trainer levels afterwards, but one step at a time.

Today I slept in late and then started sorting out some admin stuff that I didn't have capacity to deal with last week. Also for the first time in three weeks, I can focus on my books, so I'm currently going through the new set of developmental edits for my historical novel. After that, I'm hoping to look at some projects that were/are translated into German, and then back to Dark Heart.

Also, on Tuesday I'm going to a second interview at a large bank. I did enjoy editing for banks, so I'm hoping to land the job; the pay is very very good, and cons such as GRL wouldn't be a financial problem (I can't make this year's GRL, but the next one won't be a problem). Also, it should help me pay off my house very quickly, as well as pay for the qualifications I want to achieve. So it'll be a dramatic change, but I'm walking into that with very open eyes. It will likely have an impact on my writing and the time I can spend doing all my other stuff, but at the moment that's very all right with me. It'll take the pressure off, and I'm all for that.


Posted by Aleksandr Voinov at 20:38 No comments: