"Lion of Kent" is out

Today is the release date for "Lion of Kent". 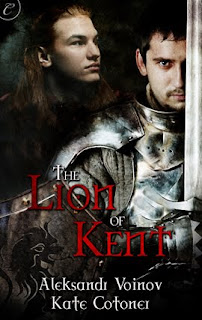 Squire William Raven has only one goal—to finally receive his spurs and become a knight. When his lord, Sir Robert de Cantilou, returns from a five-year crusade in the Holy Land, William wants nothing more than to impress him.

After Sir Robert's return, noble guests arrive from France, bringing intrigue to the castle. William is oblivious to the politics, as he's distracted by nightly visits from a faceless lover—a man who pleasures him in the dark and then leaves—a man he soon discovers is none other than his master, Sir Robert.

But William can't ignore the scheming around him when he overhears a plot to murder Robert. He becomes intent on saving his lord and lover from those who would see him killed...

Find an excerpt and the buy link here.

Would be great to see you there.
Posted by Aleksandr Voinov at 13:10