Spring greetings from my garden

When we bought Casa Voinov, we inherited a neglected garden. The back is largely taken over by an ancient, totally out of control rose tree/bush. I've done some research on roses and what's good for them (even though my mother was a florist, I don't have the first clue what to do), and realized it's basically too big.

In a first step, I cut back everything that was afflicted with that black m old you tend to get on roses (skinning some fingers in the process). Today I went back into the garden to see how the massive white rose bush/tress has responded to the surgical cuts. I discussed how to address the remaining issues - which means some serious pruning once I have the tools to attack all that old wood - the central stems are arm-thick, so I assume the rose is fifty years old or older. But it responded well to the first pruning - if anything, it's more vigorous, and I honestly think cutting about half of the major stems will result in a much happier, much healthier plant. Right now, the right side is collapsing under its own weight, so there's some serious shaping & pruning action required to get stuff under control.

I also did a round of deadheading (cutting off spent flowers). They are palm-sized floribundas (I've learnt), classical white English roses, like my mother loved them. Me growing roses is really a way of honouring her. She'd have been fussing over the roses a lot, so I kinda remember her through that.

Anyway, while I was cutting the spent flowers, I got some flowers for the house - one for my partner, some for the living room table, and one next to the computer. The fragrance is very delicate. And nothing in the world is as beautiful as a rose. There, I said it. I guess I am really a romance author. :)

Far shot of the area left of the keyboard. 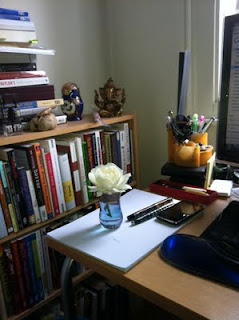 Close-up in the Turkish tea glass. 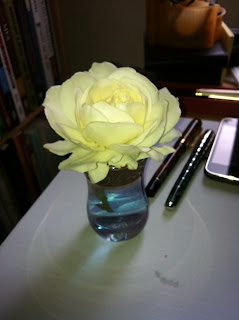 Even closer, with flash. 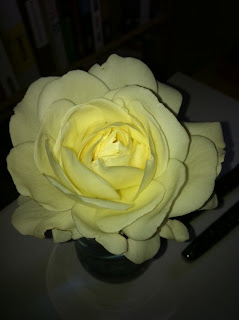 Posted by Aleksandr Voinov at 16:22