So, a couple days ago, we were burgled. My partner sent me an email to work and said "Do you have an idea where my wallet and my bag is?" And I thought, how weird, he always puts them in the same place.

So, they'd vanished out of the house. Nothing else was disturbed. No traces. No noises. No broken anythings.

So he cancelled all the cards and makes do with whatever cash I had at that point so he could buy food at work. Then we get a message from the police (like a postcard). He calls them - it emerges his wallet and "man bag" (containing a Molekskine notebook, pens, assorted riff-raff and his expensive super-light glasses) were found in the park behind the house and handed in to the police station.

So the coppers arrived yesterday and we had a walk around the house for some security advice (in short: keep everything locked constantly and out of sight from the windows), and I'm currently in talks with a number of tradespeople to fit some big-ass searchlights in the garden and front (sorry, Mr Fox). Intruder alerts, the works.

The weirdest thing is - and that feels utterly bizarre - is that they must have done that when I was/we were asleep in the house. And the idea of a stranger just walking into my house is one that's not quite easy to stomach. I'm the type who flies into a rage and seriously injures somebody breaking into my house.

But now, the guy (or guys) is just a ghost, a weird type of invisible/unfeelable haunting.

I'm still getting those big lights. Next time might be worse. And the letterbox gets closed up and we'll get one fixed from the outside.

Funny, also, how I've never known anybody in Germany who was burgled, but almost all of my friends in the UK have such experiences. Crazy.

In funny news (kind of), dude just sent me an image to work. He DOES know how my mind works. 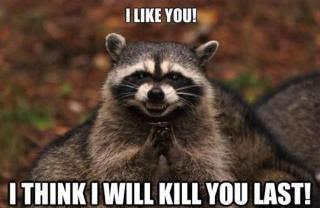 And in positive news, looks like I'll be visiting a friend in Ottawa over my birthday.
Posted by Aleksandr Voinov at 12:22