The word "release" is one of those instances where English pwns German. In German, the word for a book release is "Veroeffentlichung" (making public, so like publication)--and that works too. There's a distinct sense of "right, guys, have at it!" in the word. From the pretty lonely pleasure of, uh, my head, and co-writer and a handful of betas and the editors and proofers, it's out there. Doors/windows are wide open. There you go.

"Release" has the word "tension" built in as the implied pre-state. Tension release. Relief. Also, "hey, dog's off the chain!"--it's a lot more active, in a way, and maybe focused on the moment you press the button--and let it all go. At this point, the story has survived the "You call THAT an idea?" and the "I should be writing something else" and the inevitable "crap, what do I think I'm doing" and "why is this shit so hard" and a million doubts and a hundred moments when I think about taking up golf or something instead of writing.

So, yeah, release. Scorpion is back out. It's actually still one of my favourites, and I readily accept a huge burden of debt to Glenn Cook's "Black Company" (I pay homage in the book several times) and a number of other fantasy novels I've read (some of those have fallen to my horrible memory, but a big influence on me overall was Tanith Lee). I prefer my worlds low-magic, though I can totally see a fantasy world that has a lot of magic. (Actually the world I built while I was running GURPS table top roleplaying games, so that one is high magic and actually pretty damn epic.) 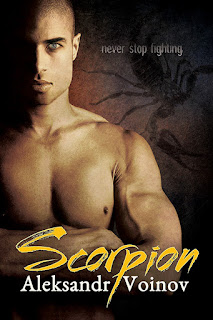 I've told the story a few times, but if you own the first version, you don't have to buy this one. I've cleaned it up (with the help of my great editor, Gordon), but the book is essentially the same. It was pretty strong when I handed it to Dreamspinner in late 2010, it was published in a pretty strong form in May 2011, then got pulled in December 2012, and is now back out, shinier and cleaner than ever before.

I'm tremendously proud of it. It wasn't that I was unhappy with that first version--it was that I wanted to clean it up to write the rest of the series that's most definitely lurking in there. (And I have been doing!) Of course, if you're a completist, I'm happy to take the cash and thank you kindly.

(Also, book 2 is done and handed over to my editor. I'm having a couple days off to relax and EDIT ALL THE OTHER THINGS.)

While If It Flies was more Spencer's journey to realising and accepting not only that he was a submissive but also in love with a prostitute, If It Fornicates is all about Nick, who has to come to terms with giving up his independence. Their story/ies  really took that shape and felt like two very separate entities, so that's how they were written: two sides of the same coin, in a way.

There's more coming: "Capture and Surrender" is the first full Market Garden novel and is currently being edited.

Then we're working on a long cop novel (100k), which we're currently cleaning up.

And over the weekend, we started work on If It Drives, likely another novel-length story about two characters who make a brief appearance in If It Fornicates.

So the plate is full, the pipeline loaded. I've done some short fiction recently, but the pendulum is swinging back towards 60k+ now--Lying with Scorpions is pretty substantial at 84-85k, and so are all the other projects. I might need to write a short story to clear out some lingering ideas, but above all, the engine is running and words are being made. And that's really the main thing. Life's too damn short, anyway, so I better get cracking.
Posted by Aleksandr Voinov at 22:30