So, we're having a heat wave in the UK. As most houses don't actually have A/C, this isn't a great time for me or my productivity - I'm too busy drinking, sweating, and seeking out places that HAVE A/C. Nevertheless, LA Witt has come over and we're currently exploring a number of places (Dover Castle, every book shop in London) and we're also stopping every now and then and write a few words. Laptops for the win.

We also went to the UK Meet last weekend and had a ball. I do think we need a "Lori and Aleks Comedy Channel". it was great meeting everybody and put faces on the names. :) Then we saw the Imperial War Museum in Manchester and the Pompeij exhibit in the British Museum.

Meanwhile, we had a book release a couple days ago. Unhinge the Universe was one of those ideas that wouldn't shut up. 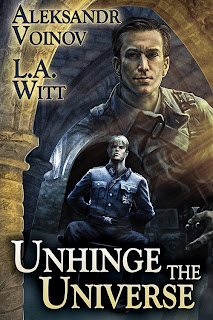 Give me one fixed point and a long enough lever, and I'll unhinge the universe. — ArchimedesDecember 1944 – The Battle of the BulgeSS Lieutenant Hagen Friedrichs is the sole survivor of a party sent to retrieve his brother—and the highly sensitive information he’s carrying—from behind enemy lines. But his daring rescue attempt fails, and Hagen becomes the prisoner.Allied command has ordered Captain John Nicholls to extract critical intelligence from their new Nazi POW. His secrets could turn the tide of the war, but are they real? John is determined to find out . . . and to shatter the prisoner who killed his lover during the attack on their tiny base. The deeper he digs, though, the more he realizes that the soldier under the SS uniform is just like him: a scared, exhausted young man who’s lost loved ones and just wants to go home.As captor and captive form an unexpected bond, the lines quickly blur between enemy, friend, and lover. And as horrifying rumors spread from the front lines and American soldiers turn their sights on the SS for vengeance, John may be Hagen’s only hope for survival.
Posted by Aleksandr Voinov at 08:45