Skybound in audio (update on Nightingale and translations)

So, the audio version of Skybound is live (Amazon, Audible, iTunes) - and some of you have already found it and bought it (thank you!).

Skybound remains my favourite piece ever, so this is a bit of a special project. (Though, wait until Nightingale, which is also in top spot.) Matthew Lloyd Davies did a great job, and the cover is from a debut artist, Nova (who's done some beautiful Unhinge the Universe art). Jordan Taylor did the fonting (the design of the actual letters). As they say, it takes a village to write a book.

I still really like the old grey cover (Jordan Taylor), but I was intrigued by the possibility to put Felix on the cover, and the planes coming out of the sun is a small touch of genius. The rivets in the title harken back to the print/e-book cover. I really like it. 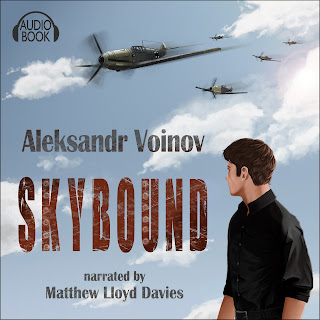 I'm enjoying doing e-books so much that I'll be aiming to get all of my catalogue into audio over the next few years. As I'm paying all narrators up front and Audible is taking a huge chunk of the money (and also does 40% off sales I cannot control and sets the price how it wants... I have literally zero power over the sales or price or even when the audiobook becomes available for sale), it's a bit of a financial consideration - we all know I went back to a day job not to finance audiobooks but to pay off the mortgage... :)

I do hope to make the money back eventually and so far what I'm seeing is encouraging on that front.

So, with Skybound wrapped, I'm waiting for Deliverance to go up (we submitted it last week) - also by Matthew Lloyd Davies, who's looking like he's becoming my "default British" voice. For American voices, obviously Gomez Pugh (Incursion) is great, and I'm really curious what you guys think of Alexander Master's version of Gold Digger (we're almost done, just cleaning up a few rough spots now). Alexander is brilliant for lots and lots of accent - hugely versatile on that front, so he's great for the Russian, Hungarian, Canadian cast of Gold Digger.

So, both Deliverance and Gold Digger should be ready very soon.

The next books I'll do in audio are Return on Investment and Nightingale. RoI should be Alexander Masters (I can practically hear him do those bankers), and I've offered Nightingale to Matthew Lloyd Davies - I'd expect he'll do a brilliant Yves. Hiring two (or three) narrators at the same time means things get completed faster, too.

And once the rights situation is clear, all the other books will follow, with the Memory of Scorpion series and Dark Soul leading the pack - but there's going to be good news about Dark Soul towards the end of 2016, so that's a good time to launch the audios. (Yes, I said that in plural :) ) I'm expecting Alexander to do the Scorpions.

And both in Munich and Bristol, some of you have been asking about Nightingale, which was originally promised for 5 October. I was doing my damned best to keep the date intact, but fate intervened - the proof-reader/copy-editor working on it has a very small baby (I didn't know this when I hired her), so the edit is taking a bit more time than I'd planned (three weeks instead one one). I should get it back on the 30th, but that's in the middle of a work week for me, and I'll be having a house guest for 10-12 days, so I was planning to not spend every second hunting down the very last typos when I'd rather look after my guest. Neither of those is a job you can easily outsource. :)

I'm still hoping to wrap everything in October, even though I also have to file my taxes in that month too (cue stress, digging up paperwork and spending lots of time with spreadsheets). So it's all a bit crazy, and that's just the stuff I can talk about.

In terms of translations, I have two rough German translations on my plate (Skybound and Deliverance) and have hired two Italian translators to do Deliverance, Incursion, Return on Investment and Nightingale - so all of those things should happen in 2016, too. 2016 will be a huge transition year for me, as I roll out my backlist into audio, German, and Italian and some books and series will see a relaunch, too. That's basically where all my royalties are going, while the day job finances paying off the mortgage and general life. It'll all be good. (Also, I'll need a French translator at some point.)

So, for the future, I'm fully expecting to continue on with some sequels and prequels of "old" stories (I have more to tell about the Scorpions, for example), while also putting out completely new, unrelated work. My horoscope says it's because of the solar/lunar eclipse (which happen at very interesting points in my horoscope - career and creativity), but I'm in a pretty good place now with my work and my overall energy levels. Saturn's going to stick around in my first house, so this is two years where I do a lot of "growing up" and "taking responsibility". It also means slow, steady growth through hard work and discipline and I'm good with that.

Not sure what's been holding things back - I'm getting regular acupuncture for stress and "yang imbalance" (you don't say), and I'm on a much better track now, mentally.

I don't think I enjoyed the break from writing, but the mind is clear, the purpose is out there and I'll take small steps along my path. I've spent the last six months just thinking and watching and re-evaluating (things, people, goals), and yeah, I've come to some conclusions and I've removed things that stressed me from my life, but mostly I got rid of them in my head (big victory). I'm not sure how much of that makes sense if you're not inside of it, but I've done a very good job at making things hard for myself.

I've decided that that's unnecessary. I am a great deal stronger and more resourceful than I've given myself credit for, and things will play out just fine for me, regardless of which path I'm taking. The most important thing is to keep walking, staying true to my inner self, and the stories that are given to me, and to overall be kinder to myself (and others). And the writing will follow. It always does. It's always been there and will always be.
Posted by Aleksandr Voinov at 12:33