(Not) business as usual

I'm just looking through a ton of paperwork. The whole process of leaving my current company took three months and was about as pleasant as a persistent itch in the unmentionables. But hopefully, after spending five hours or so in a group meeting with lawyers today, I'll be home free. In positive news, I'll get to see how City lawyers live. Yes, everything is research, and all of it is significant in some small way.

I've been reading. There's "Fanny and Stella", about a pair of Victorian crossdressers/transsexuals, which is nicely written and while I'm no fan of the Victorians, I did learn a few new things. I'm also re-reading the The Dark is Rising series by Susan Cooper, which I read in German as a teen, 25+ years ago. I needed a break from "adult fiction" and wanted to see how it's held up against my memory. I'm only about 70 pages in, but it's interesting.

I've also wrapped "the damn book", and I'm currently cutting paragraphs and sentences and individual words from the financial thriller/coming-of-age/romance novel. I've cleaned up 5 chapters out of 34, and cut 3k words from 127k. At this level of redundancy, I'll very likely hit my target of cutting at least 17k, and I might even hit 100k wordcount overall, without losing too much. It just occurs to me how hard it is to write a book that's 70% set in an office. There's only so much lunch to get and coffee to drink to break things up. Much like corporate life, come to think of it.

With the 127k monster going strong, I'll have a decent track record for 1Q 2014; re-vamped a novel, edited another novel, reducing it by 30k (ideally) and co-wrote one book with LA Witt. April will very likely be Suckerpunch, though that depends on a few external factors. May/June is my "literary" WWII novel, and after that I'll write my historical paranormal.

Mentally, the fog is lifting. I'm less stressed, and more optimistic than I've been in a long time. Overall, "real life" is a lot more fun. I got to see friends I would have struggled to meet, and in April, I want to travel over to Germany and touch base with a few more (as well as some family). I have two leads for full-time jobs, one with the largest asset manager on the planet, and one with a small house. The latter came through my network, so I owe my contact drinks at the very least, as she was "thinking of me". Nothing beats personal recommendation.

In writing-related news, LA Witt and I have won an EPIC Award, category Short Fiction - Romance, with Quid Pro Quo. Not bad for a little story we wrote because I was bored witless and would have otherwise committed terrible crimes. 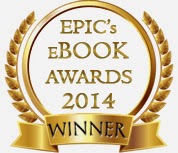 So, yeah, looks like the universe is telling me something with all these awards and awards finals and being generally productive and happy.
Posted by Aleksandr Voinov at 11:30